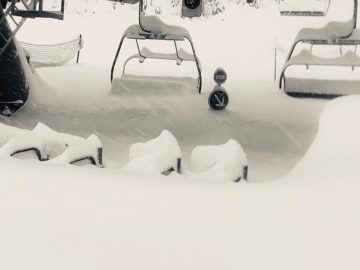 The Pyrenees mountains, home to around 50 ski areas in Andorra, France and Spain, have seen huge snowfalls over the past three days. Official snow total stats are up to  1.5 metres (five feet) over the past 72 hours though some skiers have found pockets they believe 1.8 metres (six foot) deep and drifts of up to three metres (10 feet). A number of resorts closed ahead of the snow storm arriving as along, with heavy snowfall, gale force winds were forecast, but these resorts are starting to re-open now as the storm eases.  Initially the biggest snowfalls were expected to impact Spanish ski centres but in the end it was French areas that posted the biggest falls.  Ax 3

I skied in Santa Caterina and Bormio on Friday 20 January 2017 and on Saturday 21 January 2017 respectively. Lift price valid for both resorts (as well as for Valdidentro) for 2 consecutive days at the price of 73 Euro. Ski rental per day at the price of 25 Euro. I read the Eyeball reports that in Santa Caterina the on piste was 'good', whereas in Bormio it was 'excellent'. However, in reality, it turned out to be the complete opposite. In Santa Caterina, the snow was in better quality than in Bormio. In Bormio, in most places, the snow was icy and the pistes were not so well groomed. Of course, this may not be a fault of the ski center's employees, given that in Santa Caterina it was almost empty, whereas in Bormio it was full of people. The two ski centers are close the one another (12 km - 30 min.) by bus. Ski ticket holders are entitled to free transfer. Otherwise, one way bus ticket costs 2,20 Euro. The transfer time from Bergamo airport is 2h30min by car or 3h by minivan. It is quite expensive though: one way transfer from Bergamo airport 60 Euro by minivan per person and 215 Euro per car by taxi. The ski centers are the size of a Greek ski center, so small for European standards. However, they are quite difficult. Both of them have a few blue runs and mostly red runs. In Santa Caterina I enjoyed the two pistes up in the mountain, in the sunny valley, which are labelled red, in reality maybe difficult blue. I enjoyed a lot the black Adler which had good snow, so it was more like a red one. In Santa Caterina the most difficult piste was the one leading to the gondola, because it was the only one which was quite icy. With regard to Bormio, I enjoyed a lot piste F called funicular (otherwise bambi al sol). Most pistes are red as well and very wide. In both ski centers, in the upper level, the landscape is alpine with no trees, the lower lever with pine tree forest. The good thing there were no queues even in Bormio. The most difficult piste in Bormio turned out to be piste A with the name Stelvio, in the middle. It is very steep. In reality it is black, not red as mentioned in the map. This together with the fact that it was icy resulted in me falling. But to say the truth, there was a sign saying 'piste for expert skiers'. The good thing is that one does not have to go down to the gondola via the difficult Stelvio. Instead of it, it is possible to ski in the blue Bosco, which is an easy one. In overall, with the exception of the icy pistes in Bormio, it was a nice skiing experience, especially in Santa Caterina. This winter has been really bad for Italian Alps with very little snow. However, as said, at least in Santa Caterina, the snow condition was pretty good. About apres-ski. For sure, I would not stay in Santa Caterina. it is just a small village with many hotels and nothing else. Bormio is a better option. In Bormio one shall also go to the 'terme', to enjoy hot water from the springs. However, Bormio lacked the life I expected. I went out for a dinner and the streets were empty. I generally had nice time there. However, I visited Livigno and I liked it so much. I would recommend Livigno instead of Santa Caterina and Bormio, because Livigno offers a more comprehensive holiday. Bormio and Santa Caterina are good for skiing (when there is good snow) but afterwards there is almost nothing to do. On the other hand, Livigno is a vivid city nestled in the mountains on the Swiss border. It is not more expensive than Bormio and the apres-ski is fantastic. There are so many shops, restaurants, so many people strolling on the streets etc. And the ski centers look really big, much bigger than Santa Caterina and Bormio together. Of course I heard that this year it was icy there as well. But in a normal winter I would like to come back to Livigno and spend more time there. Livigno is 50 min. from Bromio, via Foscagno pass at 2.290 m.s.l. It is not a good idea to stay in Bormio and go to Livigno (this is what I did) because the bus stops at about 17:00 and the one way taxi transfer is at the price of 70 Euro for a distance of about 35 km.
This is all about my short holiday in Valtelinese area!